Yesterday we had our first experience on the commuter train. We boarded in Dublin at Heuston station bound for Waterford. Everything went seamlessly. Since I had pre-purchased all our tickets before leaving the US all we had to do was go to the kiosk and enter our booking number and our tickets printed. This trip was a straight shot, never having to change trains.  Tomorrow we will be leaving Waterford and heading to Killarney we will need to make one change….that could be interesting. Overall I really enjoyed traveling by train, it is slower but very relaxing and it was nice to see the Irish countryside. 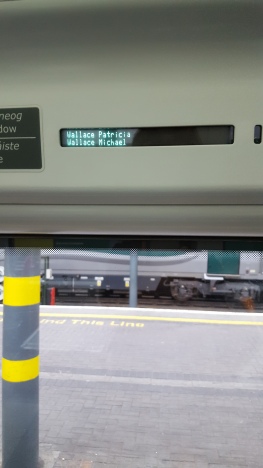 Arriving in Waterford the weather befitted the name, it was a soft but steady rain.  There were no taxi’s to be had, fortunately our hotel was only a ten minute walk away on the other side of the Suir River.  Again we had arrived too early for check in but were able to leave our bags at the desk.  We changed into our rain gear and hit the town; I had a list of museums that I wanted to see….Waterford was only a 24 hour stop so we had to make the most of our time.  The museum’s we saw were: The Medieval Museum, Bishop’s Palace & Reginald’s Tower.

Medieval Museum had an exhibit that gave the history of Waterford from the first landing of the Vikings to present day.  They have an extensive collection of artifacts that are truly amazing.  I love very old books, manuscripts; there’s just something about seeing the handwriting of someone who lived so long ago…it’s very personal and makes me feel close to them.  They have on display the only original piece of clothing still in existence that was worn by King Henry the VIII, a hat that King Henry gave to the mayor of Waterford William Wyse in 1536!  There is also a complete set of medieval priest’s vestments dating from the 1460’s made of cloth that was made from spun gold!

Reginald’s Tower is thought to be named after Reginald a Viking that built the defensive tower that still stands today.  The tower continued to be added on to by subsequent rulers until it reached it’s current height today.  The tower and later the stone wall which encompassed the city, was the only city that ever defeated an assault from Oliver Cromwell!  There is still a cannonball lodged in the northern side of Reginald’s Tower.

*Hover mouse over photo below to see captions; Can you guess what the object on the left is??? 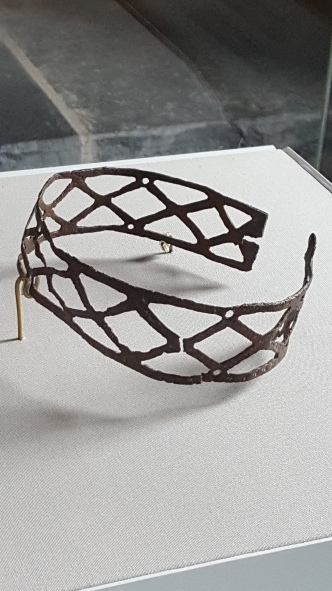 Tower walls are so thick!

Bishop’s Palace is where various Bishop’s would take up residence. It was built in 1741 and showcases the period of elegance that included fine silver and glassware.  It contains the oldest piece of Waterford Crystal, a Penrose Decanter that dates to 1789.

Waterford have very different vibe than Dublin.  Not very busy, this could be due to the fact that we were there on a Sunday and many local shops were closed.  It’s not as “touristy” as Dublin, which I found very refreshing.  We had a cozy dinner in the hotel’s bar and were treated to Irish ballads sung by a local musician.  A very nice way to end our time in Waterford.