\“The heavens declare the glory of God; the skies proclaim the work of His hands.”
—Psalm 19:1
This was a long tour, we started at 9:00am and finished at 7:15pm! It was a very gray and cloudy day at the start. We took a 2 hour ride up the coast of Northern Ireland by coach to Carrickfergus Castle.  Built in 1177 on the Belfast Lough, it changed hands many times during medieval times.  During WWI the castle was used as a garrison and ordnance store and in WWII it was used as an air raid shelter. 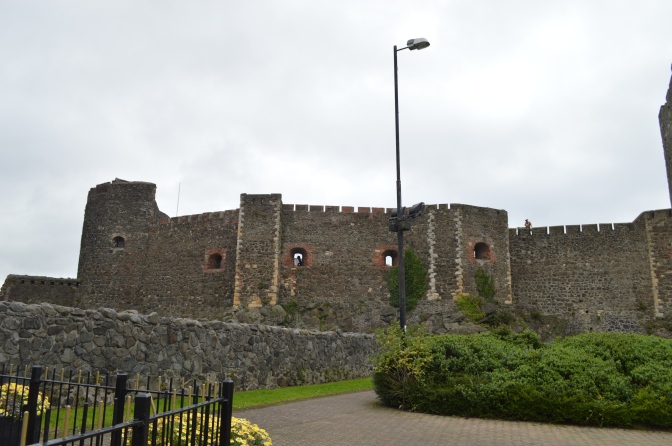 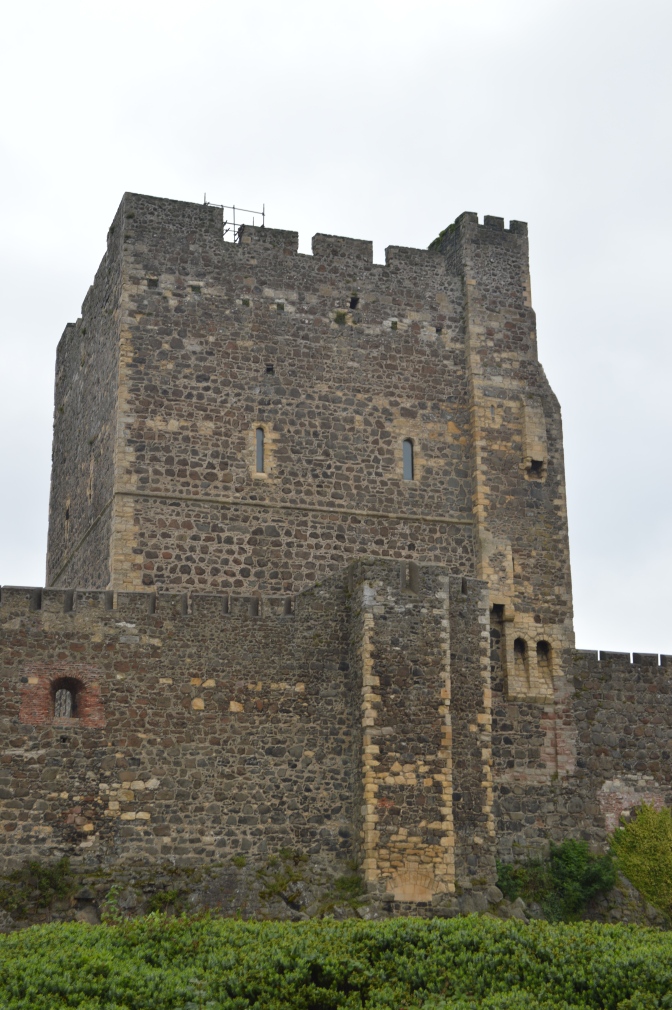 The next stop was the Carrick-a-Rede rope bridge. This bridge connects the main land with the tiny island of Carrickarede. The bridge spans 66 feet and is 98 feet above the ocean. The bridge was originally used by salmon fishermen to facilitate stretching their nets between to the two land masses. In the 1960’s 300 fish per day were caught in this area, but the salmon are few in number now and the rope is only used by visitors. The bridge is inspected daily, good thing too for on May 24th, 2017 it was noticed on routine inspection that vandals during the night damaged the structural ropes to the bridge. The bridge was closed for repairs and was able to reopen the following day.

The weather had changed to a misty rain when we arrived, but after the 15-minute walk to the bridge it had stopped and we were able to cross the bridge without any rain! We didn’t get any pictures on or crossing the bridge, I didn’t want to chance dropping my phone into the sea and would rather keep my hands on the rope rail! About 5 minutes after crossing it began a steady rain! The Lord blessed us again!

Crossing the rope bridge wasn’t nearly as nerve wracking as I thought it might be. It is a suspension bridge and you did feel the bridge wobble from the weight of people getting on and off but overall it felt very sturdy. I could look down to the swirling ocean water below with no problem. They have recently spotted whales, dolphins & basking sharks in the waters around the bridge; we didn’t see anything like that on our visit…too bad. Once you arrived at the island you could look around, the island is small but tall and you couldn’t really go too far; then it was back across the bridge. We were prepared for the weather with our rain jackets and rain pants. I really enjoyed walking in the mist & light rain; the temperature was warm and it wasn’t too windy. A very Irish day!

After the rope bridge, it was time for lunch in a small village nearby. Our driver had us browse a menu and mark down what we wanted to eat, he then called ahead to the restaurant. When we arrived, we went straight to a large room reserved for our group and our lunches were ready and brought straight to our tables! I thought that was really great, we got to have a hot sit-down lunch without the wait!
After lunch, it was a stop at the Bushmills Whiskey Distillery, you could smell the whiskey as soon as you approached the building. Michael thought it smelled like strong apple cider. Now that is not a miss-spelling; our guide was sure to point out that the Irish spell Whiskey with an “Ey” and the Scots spelled it just “ky” because the Irish has an “E” for “Excellent”!   We didn’t have time to take a tour of the distillery but if you wanted you could take a tasting of an 8, 10 & 12-year-old whiskey for 1 pound each. We had no desire to taste whiskey so we just used this stop as a chance to stretch our legs and use the loo. 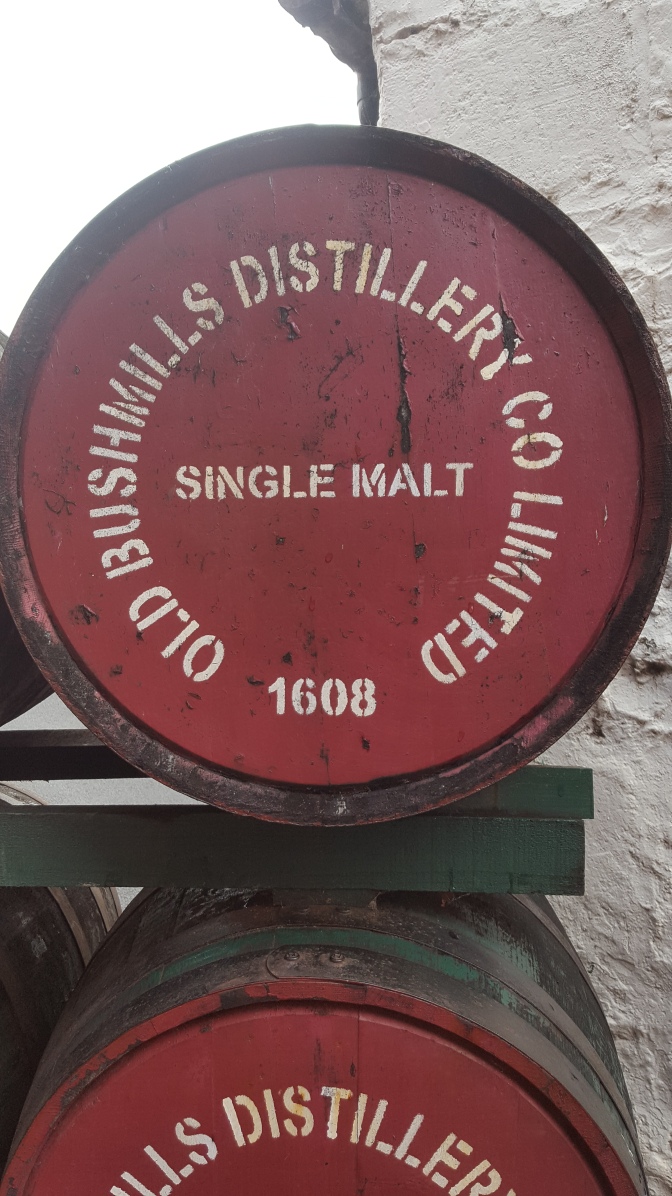 Now it was on to the main attraction…. the Giants Causeway! At this point the rain had stopped altogether and although it was still mostly cloudy the sun did manage to pop through from time to time and we even saw a rainbow! How can you be disappointed with that?!

The Giants Causeway is truly amazing! We took a 35-minute guided tour by a retired cop who gave us geologic/scientific information on the formation of the causeway as well as Irish folklore about the formation of the causeway. I’ll share the folklore; Finn MacCool was a giant who lived on the Irish coast and not wanting to get his feet wet he built the causeway as stepping-stones.  I have some photos of the mountain where Finn McCool lives, showing his chimney and pipe organ. It’s been said that if you’re out on the causeway after dark you can hear the music of a pipe organ carried on the ocean breeze, that’s Finn playing his pipe organ. 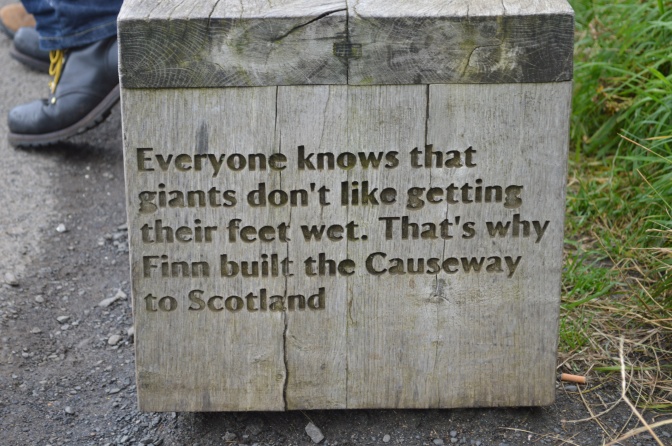 After the short walking tour, we scrambled around on the hexagon steps and took photos. A really wondrous place, with beautiful views.

As I marveled at this place and thought of all the other beautiful natural places I’ve visited in my lifetime, I become awed and humbled at the diverse creativity of God and a song comes to my mind.

“This is my Father’s world, and to my listening ears
All nature sings, and round me rings the music of the spheres.

This is my Father’s world, the birds their carols raise,
The morning light, the lily white, declare their Maker’s praise.

This is my Father’s world; I rest me in the thought
Of rocks and trees, of skies and seas;
His hand the wonders wrought!

This is my Father’s world. O let me ne’er forget
That though the wrong seems oft so strong, God is the ruler yet.

This is my Father’s world; why should my heart be sad?
The Lord is King, let the heaven’s ring!
God reigns, let the earth be glad!

This is my Father’s world: He shines in all that’s fair;
In the rustling grass, I hear Him pass;
He speaks to me everywhere!”