Spent a week at our lake house for the 4th of July holiday and it was wonderful to get away from the routine of daily life for a spell.  The sunsets, as seen above, are truly gorgeous but my favorite time of day at the lake is early morning; when the sun is just beginning to peak out over the tree line.  While most still slumber in their beds, I get to absorb the still beauty of nature and the quiet comings and goings of wildlife.

In the morning the lake is quiet & calm….it whispers.  Quite a contrast to the choppy churning waters of the day caused by a constant flow of boaters, jet skiers and swimmers.

Jet doesn’t appreciate swimming much but loves the speed of a pontoon ride, her ears floating on the breeze.

During that week took an overnight trip to Mackinaw City & spent a day on Mackinac Island.  I have always wanted to take a trip to the island with my dogs, I’ve seen many others with their dogs over the years.  Michigan is not known to be that pet friendly of a state, unlike California or the city of Chicago where there are many opportunities to bring your dog along to outdoor cafes, beaches, parks and even some stores.  There is legislation in Michigan at the moment to allow pets in any restaurant that has outdoor seating; currently it is up to the individual establishment. There are a couple of cities within Michigan that are more pet friendly, Traverse City is one as well as Mackinaw City & Mackinac Island.  I was pleasantly surprised to see how many hotels in Mackinaw City welcomed pets for a reasonable fee of $25 per pet.  The ferry ride over to Mackinac Island was pet friendly as well and passage for pets are free of charge! 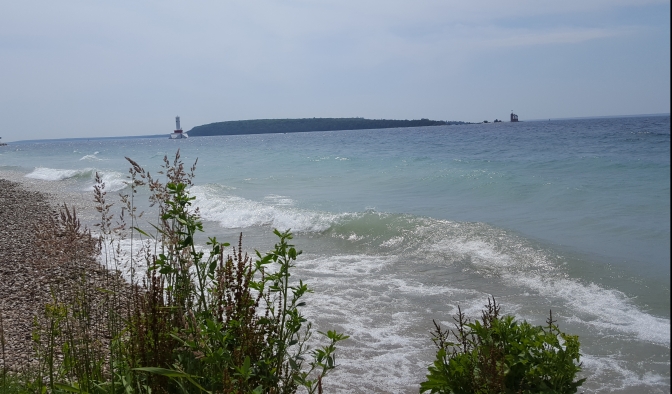 Once on the island we decided to explore the 70 miles of hiking trails. Typically when we have visited in the past we take a bike ride of the 8.2 mile loop that encircles the island with the view of the water always on one side. This time we explored the interior trails and it did not disappoint.  I saw views and encountered areas I never knew existed before.  The interior trails are also used by equine riders and I was so proud how both of my pups behaved, never seeing a horse before, they both looked in curiosity but never barked or reacted in such a way as to spook the horses. 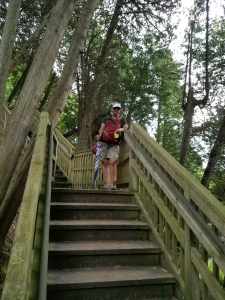 Our hike began by following the island’s perimeter trail next to the water where we had some great views.  In order to get to the interior of the island we had to move up in elevation…..which involved a 205 step staircase!  I didn’t think Griz, our Chihuahua/terrier mix, would be able to climb that many stairs….he already favors his left rear leg at times.  Not wanting to aggravate any potential injuries into my backpack he went!  My other dog, a border terrier named Jet, hasn’t really been exposed to stairs.  We don’t have any at our home & when we visit family who have stairs she refuses to climb them.  Knowing this my hubby tucks all 13 pounds of her under his arm and begins the climb.  There are landings every so often with a bench for resting and we took our time.  About 2/3 of the way up we put the dogs down for a rest and when we stood to continue on both dogs took the lead and began the climb on their own!  Now we know they’ve been playing us the whole time! LOL 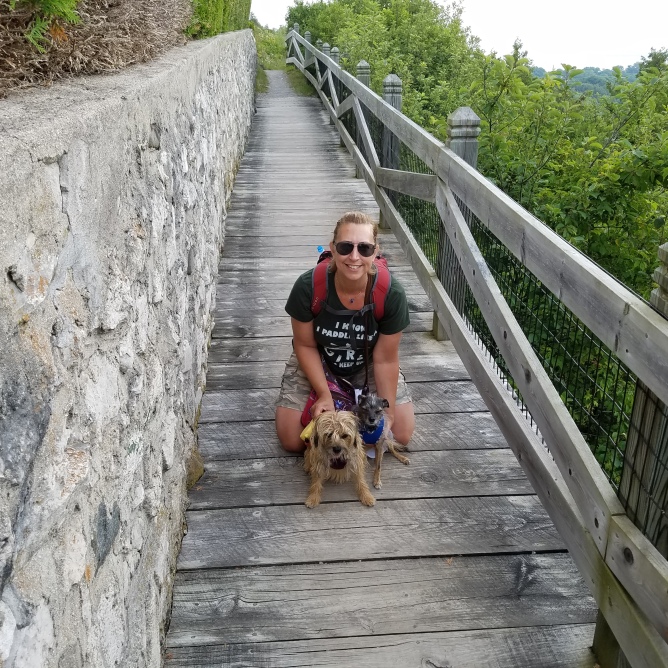 looked like something from a Kincaid painting. Our idyllic hike soon became a very different type of adventure.  Walking in through a trail with a dense canopy of trees and green vegetation on both sides the light suddenly became dull….as if someone turned a dimmer switch to the lowest setting followed by a long low grumble. A storm was approaching, fast.  Within what seemed like minutes very loud peals of thunder crashed above us and rain began to pour down.  Those two things really didn’t bother me but the flashes of lightning caused some mild fear to creep up.  There was no real shelter to be found on those trails so we had no choice but to press on and find a main road that let back down into town.  My poor pups were troopers though….plodding along.  Jet, with her coarse wiry coat, would stop every few minutes to give a good shake and the water would just fling off her coat.  My little Griz, on the other hand, has a very thick soft under coat that acted like a sponge and just absorbed every drop; he looked like a drowned rat.

After about 20 more minutes of hiking we found the road that led back down to town. We were all thourally soaked so walking in the down pour didn’t bother us much anymore…but the lightning seemed to pick up so we dashed onto a covered wooden porch of what seemed like an abandoned house or one that was used only as storage and waited for the storm to calm down.  After about 10 minutes the storm lessened and we began again, reaching the main street of town.  Poor Griz was beginning to shiver, I popped into a souvenir store and found a very large beach towel to dry all of us off with and to wrap up my freezing pup! The sun began to shine again and my husband connected with his brother, who came with us on the trip but not on the hike.  We left the dogs to warm up in the sunshine under his care while we went to warm ourselves with a hot lunch.

The rest of the trip was uneventful.  When we got back to our hotel rooms the pups had dinner and fell hard asleep the rest of the evening.  The next morning was beautiful, we wandered around Mackinaw City for a spell then drove over the Mackinac Bridge to spend some time on the shore of Lake Michigan in the Upper Peninsula. Overall it was a great trip & a fun adventure!  I’d do it all over again!